Christian Syriacs will survive but the mosaic of Iraqi past is gone.

ESU foreign affairs representative Metin Rhawi on his recent visit with Swedish MP Lars Adaktusson to the Nineveh Plain (NP) in Iraq: the presence and continuation of our people in the NP is becoming more threatening. We visited Syriac historical hometowns and villages as Bartile, Baghdede (Qaraqosh), Qeremles, Alqosh and Telesqof. The ISIS invasion of 2015 really left its mark. Only about 40% of the 150.000 Syriac inhabitants have returned. Everywhere you go on the NP there are checkpoints. All people we talked to, whether our partner-organization Bethnahrin Union Party (HBA), bishop Petros Mushe of the Syriac-Catholic Church, the mayor of Baghdede Behnam Dacbul or local Syriac-Orthodox and Chaldean priests… all paint the same picture. Reconstruction is very slow. There is western support but its insufficient. There are no factories, no jobs and people have financial problems. All aggravated by Muslim boycotts of Syriac Christian shops forcing them in the end to close shop. A deliberate attempt to force Syriacs out of their hometowns. Many Syriacs from the NP prefer to stay in Ankawa and Erbil or try to reach the West.
On the national level, the instable, corrupt and fragmented Iraqi politics leave room for Iran backed paramilitary forces (Popular Mobilization Forces) to exercise power and implement a demographic change in favor of Shiites. Pre-ISIS Bartile was overwhelmingly Syriac. Now Shiite Shabaks moved in from the countryside and now constitute almost half of the population. Baghdede is the biggest Syriac town in the NP. Of the 45.000 Syriac-Catholic inhabitants only half returned. The ancient village of Baquba is empty. Batnaya is under the control of Hasd al-Shabii. Alqosh is within the sphere of influence of the KRG. Syriacs (and Yazidis) are stuck in the middle of the Sunni-Shia struggle for power, in between Iranian proxies, ISIS remnants, Kurdish and Shabak pressure and the ineffective, corrupt and fragmented political constellation. Christian Syriacs will survive but the mosaic of Iraqi past is gone. The chances of the NP and its peoples getting an autonomous or self-determination status, as per 2014 ministerial provisional decision, are diminishing because of the current situation in Iraq. But Lars Adaktusson, I and HBA will keep working on this. Our Iraqi visits and efforts are to keep our Syriac political parties together. These are the parties and that signed the 2017 Position Paper for self-rule of the NP in the Federal state of Iraq, and where our people have a role in the governance and security. Also read Lars Adaktussons interview with Swedish newspaper Dagen: https://www.dagen.se/nyheter/lars-adaktusson-orolig-for-kristna-pa-nineveslatten-i-irak-1.1610322 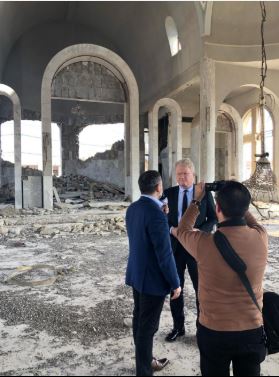 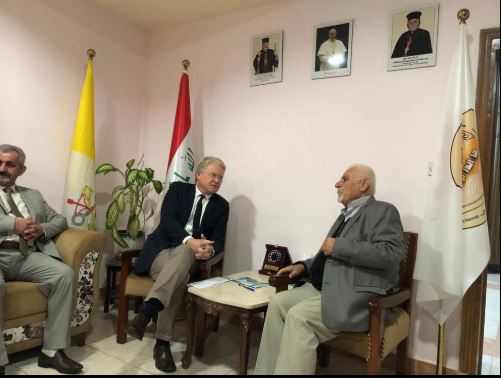 Lars Adaktusson at the Syriac-Orthodox church of Mor Afrem of Nineveh (Mosul). The Church was in use as a media center by ISIS. Now destroyed. 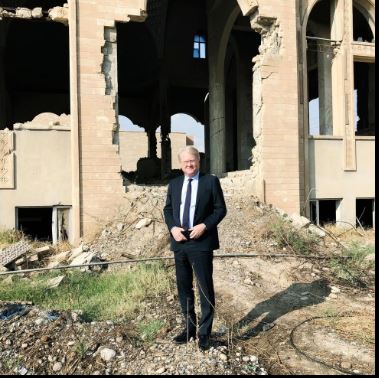